Well, more information is slowly coming out about TESO, so I am wondering if I should start writing this more as a blog towards TESO. Probably not, for now, since just posting random speculation is pointless as it serves no real purpose other than making conjecture and non-sense about something we know exceptionally little about other than personal accounts of a private screening several months ago. However, there is probably one thing I think that should be touched on with this blog concerning the expectations and the divisionary line between a normal, single player gamer and an MMO player, and the obvious lines of difference between the games.

Why I am writing this is more or less aimed at the crowd of people that undoubtedly have a certain expectation of what they think TESO will be like, and quite frankly, some of those expectations are a tad ludicrous. This is not to say that I don’t have certain expectations of my own as well, I most certainly do, but there are certain things that just won’t translate well into a field where many people will be playing in the same area. Certain things, for instance, just won’t be acceptable, no matter how it is attempted to be justified in the grand scheme of an MMO. 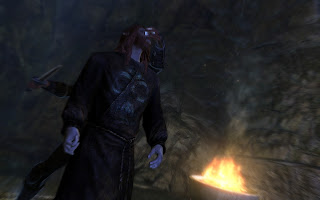 One of the biggest hot topic debates is, of course, the first person view debate. Now, first person view is a great little thing… for single player title games where it works at. Why? Because a game built around single player is designed and constructed where the player only has to deal with those elements immediately near them and most often within their field of view and control. Some may argue to the contrary but even things at range are carefully designed so that players can still see them. In an MMO this is not the case, especially with big complex boss battles. Things are happening that the player needs to be aware of to keep ahead of the curve on because things that happen don’t always just happen with the boss themselves. Sometimes it might actually be the environment that you need to be aware of, and first person perspective just doesn’t offer this. Furthermore, first person is just plain inferior for basic surveillance. Yea, the argument is for immersion but really, first person has its place, and it can help with immersion, but it certainly doesn’t make feeling a part of the game any stronger since the hands you see are still not your own.

Another thing that’s come up is pick pocketing. This was a debate in MMOs since the days of UO when pick pocketing was allowed, but suffice it to say, regardless of player intent, eventually everyone is pretty much a thief by the end of their game play session in a TES game. You could have started out with the idea of being a noble knight, but by the end of the game you’re probably a skilled larcenist with at least several high profile assassinations under your belt as well. Needless to say, there is just no way to balance this in a multiplayer stage setting. Most people that think taking from other players think it would be cool and fun, but fail to realize that they can have their stuff taken in turn. And most of the times, when people think of pick pocketing, they do not think of it happening to them, only them doing it to others.  And pick pocketing from monsters would either end up being useless and underwhelming or so lucrative that it’s all people will do so there is no real way to balance it reliably within the scope of an MMO. 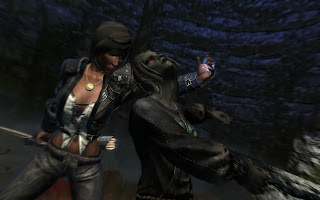 That brings up another thought in general, something single player gamers never really think about anyways; balance. Single player gamers have options, a lot of them. In fact, you would probably be hard pressed to find a single player gamer who hasn’t used a mod, console command or altered save files to better suit their play style. Hell, even quick save and quick load are things that single player gamers take for granted to remove unfavorable things that happen to restore lost items. In an MMO these options won’t exist. When you die, any items you used will be lost and any progress you made will have to be redone to a point. You won’t be able to call up a console command, alter save states, or install a mod that changes things to suit your play style. And there is no quick save or quick load. What happened, happened, and the consequences of your action are more readily apparent.

Finally, another thing that single player gamers, a major thing, that they might have to contend with is the fact that when things happen in an MMO, it’s usually with other players. This means that bad blood you form won’t be forgotten because you left town like is so often the case in Skyrim. If a player hates you, they will remember you and probably hate you for a while. Furthermore, you have a chance to lose in an MMO. Single player games just make things rather simplistic, defeat is just a quick load away from correction while defeat in an MMO has more tangible effects. This can range from death penalties, repair costs, to just respawn points at a distance away from where you were.

There are way more things of course but I think those are the major things to look at. I know this was sort of a random, jumbled mess, and somewhat incoherent, but I figured I would try to put two cents in on each of those topics. Next blog I think I will make a part two to my last blog post because after I wrote that I realized there was a hell of a lot more objects that would actually make me completely interested in TESO and a staunch player of it if it happened.

Leave a comment below, have fun, and until next time.
Posted by Silverspar